Bangladesh: An IT Nation

From the golden age of spice trade, to the ruins after the 1970’s civil war, Bangladesh is on the rise again thanks to the digital economy. Here’s a short introduction to the realm of the Bengali. 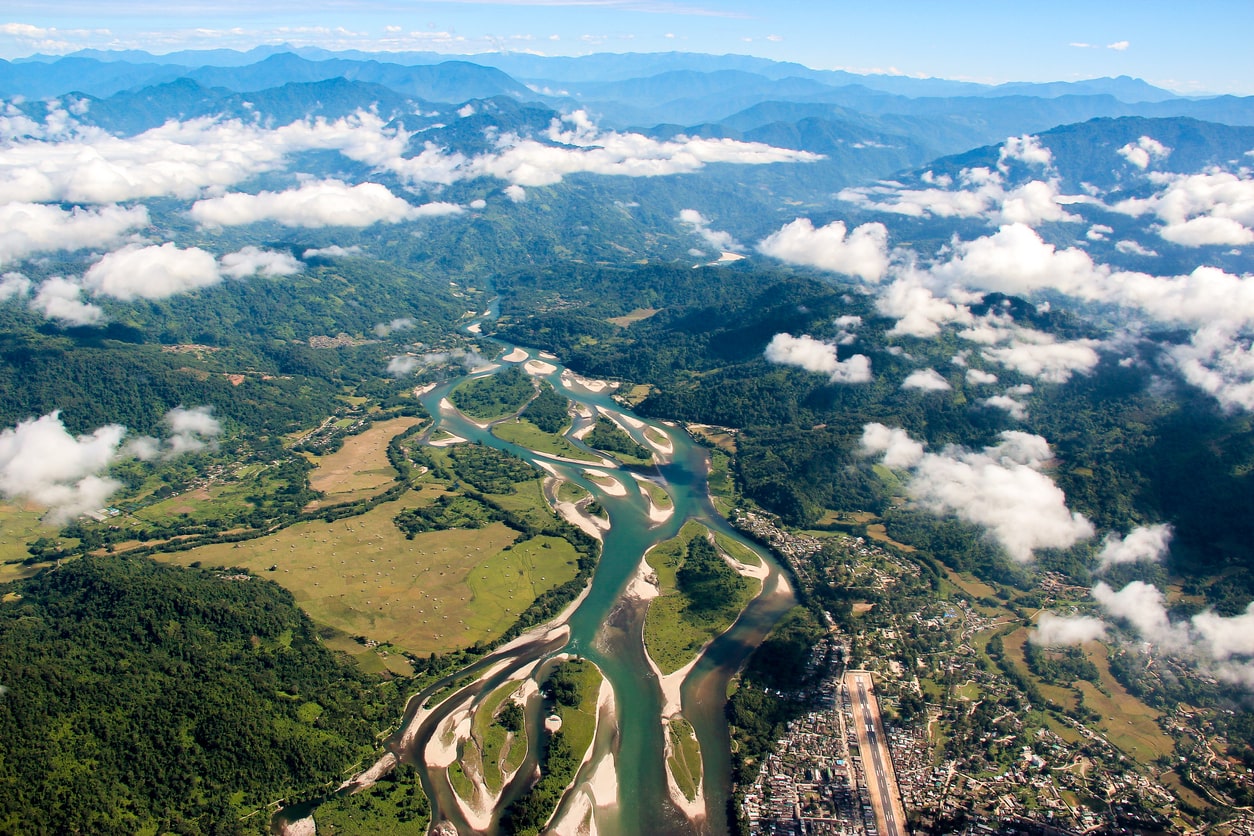 Bangladesh is part of the Indian subcontinent, with the Bay of Bengal to the south, Myanmar to the east, and India to the north and west. The rivers Ganges and Brahmaputra flow through the country, providing fertile earth. It’s not without reason that Bangladesh is among the largest producers of mango, vegetables and rice in the world.

In the heart of Bangladesh, we find the capital of Dhaka, home to 25 million of the country’s 165 million inhabitants. The city lies near the river Buriganga, surrounded by tropical vegetation. Within the city walls, you’ll find remnants of the country’s rich history, tightly intermingled with the modern and futuristic.

Dhaka is the very symbol of Bangladesh’s journey; from the heyday of spice trade, through civil war, to the emergence of the middle class. You’ll find palaces, mosques and forts from the 17th and 18th century, Western inspired buildings from colonial times, and skyscrapers whose doors have barely been opened.

A young and growing middle class has provided momentum to the service industry, and new malls, restaurants and recreational arenas are constantly popping up. 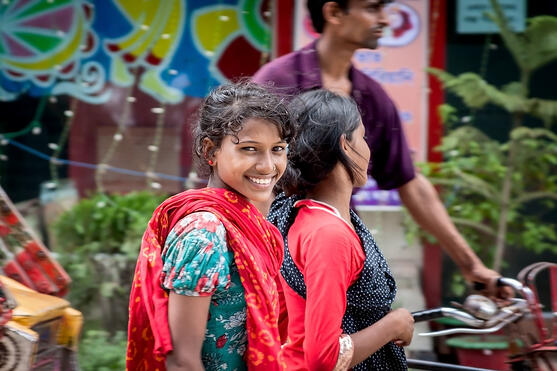 For the last 20 years, Bangladesh has been one of the fastest growing economies in the world. In order to take the development even further, the country has made a huge investment in IT and technology. If we turn back time half a century, however, the situation was completely different. In fact, there was little to suggest that Bangladesh should succeed.

Historically, the country we today know as Bangladesh has been the eastern part of the Bengal region. Through thousands of years the country has been known as East Bengal; from the Indus Valley Civilization to the colonization of South Asia. When Great Britain split British India in two, the country got a new name: East Pakistan.

Logically, they got their new name as a consequence of the merger with Pakistan in 1947. This was a milestone in Bangladesh’s history, but it was far from a golden age. Britain decided to split British India in two along cultural and religious lines, putting aside geographical concerns. Bangladesh (then “East Pakistan) is located on the opposite side of India from Pakistan (then “West Pakistan”), sharing no borders – a bad starting point for a new nation.

The relationship between East and West was fragile from the beginning. None of the areas were particularly rich in resources, both were densely populated, and the political situation was unstable. When Bangladesh declared their independence March 26th 1971, this resulted in an eight month civil war. When it was over, between 300 000 and  3 000 000 Bengals had lost their lives, and 10 000 000 had fled the country.

The Miracle of Bangladesh

To claim Bangladesh had a difficult starting point as an independent nation would be an understatement. The country was torn apart by war, and the coffers were empty.

The first years as a sovereign state were similarly difficult, with several military coups and political assassinations. The child mortality rate was over 20 percent, less than one fifth of the population were literate, and most people lived far below the poverty line.

Few, if any, could imagine that the country would become one of the world’s fastest growing economies in the coming decades. This may be why many people describe Bangladesh as a miracle.

After the gradual stabilization of Bangladesh, several measures have contributed to the change. For instance, the government opened up for the private sector and prioritized education and public health.

The statistics from the period are remarkable. Only China has experienced a faster growth in agriculture since 1995, the child mortality rate has sunk to three percent, four out of five people can read and write, and the gross national product has grown by more than two percent every year since 1982. Finally, the population’s life expectancy has increased from 45 years in 1972, to 73 years in 2021. 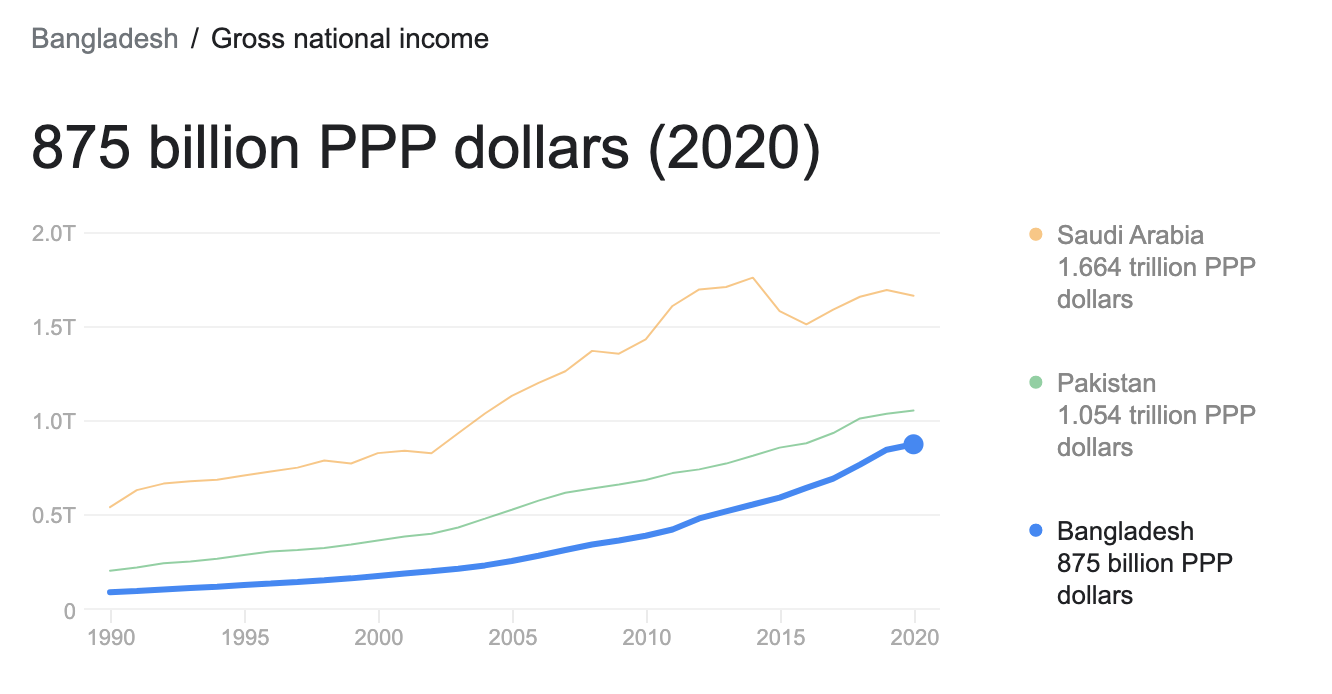 Bangladesh as an IT Nation

The Bangladeshi government has chosen IT and technology as focus areas for the next step of development. The goal is no less than becoming “the IT nation Bangladesh”. The industry is far from new, however; it has existed for 60 years.

The beginning of the story of the Bangladeshi IT sector takes place in the 60s, when the country’s first computer was installed. In the humble beginnings, computers were mainly used in science. Advanced computer equipment was first imported on a larger scale after the liberation in 1971. In the 80’s, the computer entered regular households, and when the Internet became more accessible during the 90’s, a growing export industry began to take shape.

Not until the financial crisis of 2008, however, did the country truly invest in the IT sector. True, Bangladesh had recently been ranked as one of the top three offshoring countries for software and IT services competencies by the Japan International Cooperation Agency, but it was the government’s launch of Vision 2021 that truly got the ball rolling.

Vision 2021 is an ambitious plan to eradicate poverty, provide health coverage to everyone, and establish the country as an economic hub within the region. To reach these goals, technology is paramount. The ambition is referred to as “Digital Bangladesh”, and as the name suggests, it involves a massive investment in necessary infrastructure, facilitation for the use of new technology, and a larger focus on IT in the educational system.

To Western eyes, some of the measures may seem like givens, like establishing phone numbers for emergency services or digital banking. Even so, these are services that help save lives, lift people out of poverty and increase social mobility.

Other initiatives, however, are on the other end of the scale. For instance, the government launched a new AI strategy right before Covid hit, and are also investing in so-called “frontier tech” facilities together with companies like IBM.

To drive the point home even further, Bangladesh has: 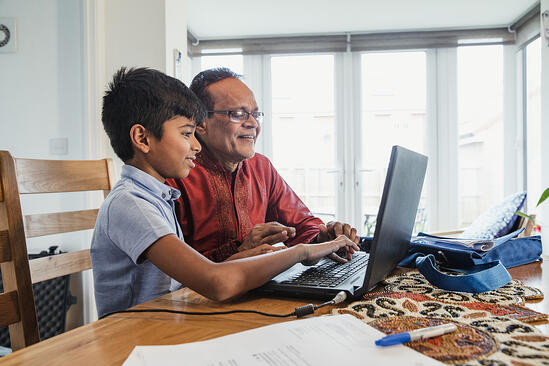 It’s hard to imagine how a country is able to evolve so quickly when it comes to technology, but for Bangladesh there are two factors that have made it possible: A young population and rapid urbanization.

Because of this, education has been a priority for the government. Today, 97 percent of all children are enrolled in school, and about 60 percent continue past the primary years. The results are especially visible when you look at the statistics for literacy. 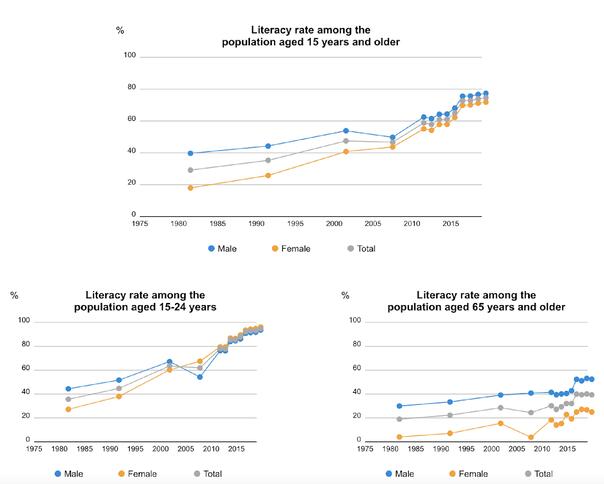 At the same time, the country is experiencing a massive urbanization. The cities offer more specialized employment, a wider array of recreational activities, and opportunities for improved wealth. Cities tend to be connected to a growing middle class, and is almost a prerequisite for economic growth. It’s estimated that 48 percent of the population will live in cities by 2030.

The combination of a young population with a primary education moving to the cities, has created new opportunities for the use of technology – especially within higher education.

Today, there are about 150 universities across Bangladesh. Most of them are found in cities such as Dhaka, Chittagong and Khulna. Several of them have a special focus on IT, technology and engineering.

Every year, 500 000 people graduate from Bengali universities, 65 000 of them with IT related competencies – and nearly everyone speaks English. It’s been important to us to establish a position where we can recruit the very best of these, which is why we’ve put the developers at the top of the Cefalo Model. 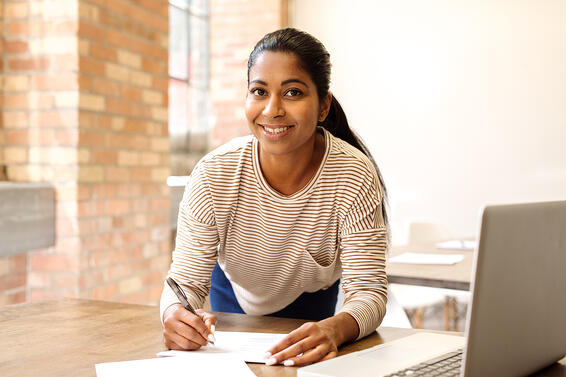 The investment in technology is connected to other goals for the new vision, especially the economic ones. To make the country more attractive to investors and contribute to turn the economy away from agriculture and primary industries, Bangladesh has established economic zones for different industries.

As an example, in 2010 a government agency was established with a mandate of managing so-called “hi-tech parks”. 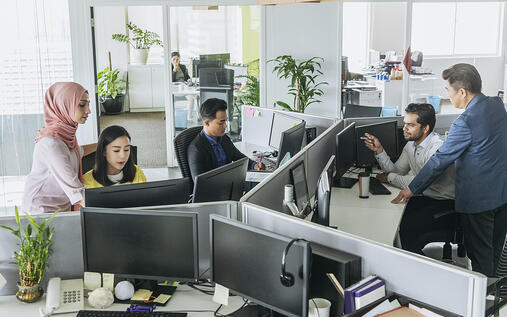 Bangladesh began developing the first parks a few years later, but only lately has it truly picked up speed. The parks are often established as a joint project with one of the country’s many universities, but it was recently announced that the Korean conglomerate Youngone is establishing the first hi-tech park in the harbor city of Chittagong. The initiative is meant to improve the startup ecosystem and develop the country’s hi-tech industry.

Although there’s still a way to go before IT is the main part of the Bengali economy, tech is a substantial driver of growth. As a nation, Bangladesh already exports software and IT products to more than 50 nations, and the growth is in a league of its own. In 2009, the country exported IT related services and products for 28 million USD. Today the number has increased to one billion, and is expected to reach four billion by 2025.

By turning IT and technology into an advantage, Bangladesh is able to enjoy the fruits of the industry: Better and cheaper public services, and a competitive private sector.

Cefalo did not choose Bangladesh without reason. The investment in IT and technology has made it possible to recruit highly educated and experienced developers, and our strategy is to be the most attractive employer for this group.

This benefits our customers as well.

Are you curious about external development? We are happy to have a pleasant chat with you by phone, meeting or video. 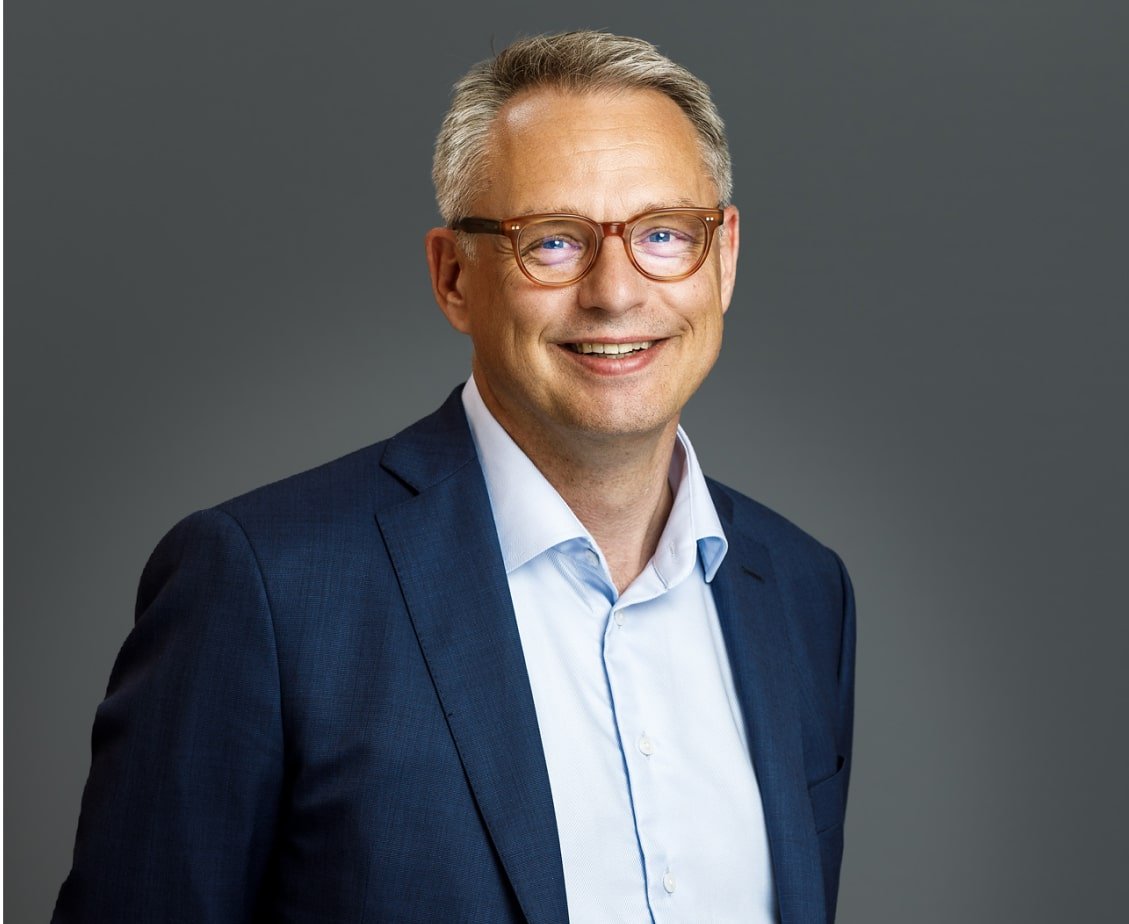 Working with Cefalo: How it works

How to succeed with distributed teams

From Few Developers to Many – How To Grow Professionally